Brownwood News – The Board of Directors of the Brown County Water Improvement District, at its monthly meeting October 13, hired a new Chief of the Lake Patrol.

Mark Davis was hired on a 4-0 vote and sworn in immediately.  Davis is a native of California, and has been in law enforcement for 25 years.  In California he spent almost 10 years as a Deputy Sheriff.  In 2004 he moved to Texas, and most recently worked for the Williamson County Sheriff’s Department.  Davis has much experience and training in boat patrol, dive rescue, and swift water rescue.  He will begin his duties immediately.

Former Lake Patrol Chief has retired and will soon begin a new occupation as a Brown County Constable.

Also hired as a Lake Patrol officer was Donald L. Batteas.  He is the son of Bo Batteas, a former Brown County Lake Patrolman. 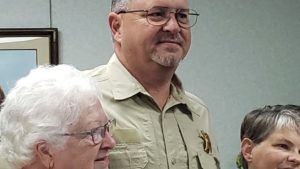