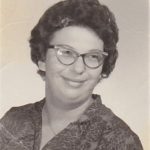 A graveside funeral service will be held at 11:00 a.m. Saturday, August 15, at the Brown Ranch Cemetery Pavilion, near Fisk, Coleman County, Texas.

She was born Linda Marleen Brooker on April 10, 1950 in Coleman to William Henry “Buster” Brooker and Ethel Maureen Ballard Brooker.  Linda grew up in Coleman where she attended school.  She married Jerry Wayne Craker, Sr. on September 2, 1972 in Dallas.  Linda enjoyed oil painting and taking care of her family.  She was a Baptist and a homemaker. Linda lived in Coleman until moving to Abilene in 2011 to be closer to family.

Remembrances, condolences, and messages of comfort can be expressed at www.livingmemorials.com.  Stevens Funeral Home is honored to serve the Craker family.