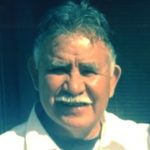 Felies S. Diaz, age 63, of Coleman, passed from this life on Saturday, September 19, 2020 at Shannon Medical Center in San Angelo.

A funeral service will be held at 3:00 p.m. Wednesday, September 23, at Stevens Funeral Home Chapel with Bro. Don Cothran officiating.  Interment will follow in the Talpa Cemetery.  Services are entrusted to Stevens Funeral Home, 400 W. Pecan Street, in Coleman.

He was born Felies Suniga Diaz on April 4, 1957 in Santa Anna to Buster Diaz and Aurora Suniga Diaz.  Felies grew up in Coleman where he attended school.  He proudly served in the United States Marine Corps.  Felies married Maudie Kay Jackson on May 12, 1988 in Coleman.  He was a mechanic and pastor at Brazos Street Community Church.

He is preceded in death by his parents, Buster and Aurora Diaz; one sister, Leticia Diaz; one brother, Emilio Diaz; and granddaughter, Chelsea Jackson.

Remembrances, condolences, and messages of comfort can be expressed to the family at www.livingmemorials.com

Stevens Funeral Home is honored to serve the Diaz family.