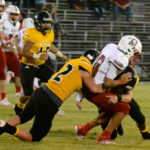 KNOX CITY – The May Tigers bounced back from a four-point loss to Sterling City last week with a four-point triumph, 60-56, over the Knox City Greyhounds Friday night.

On the ground, Halk rushed for 102 yards and two scores, Bustamante finished with 83 yards and a score, Damian Salinas chipped in 48 yards and a touchdown, Isidro Salinas tacked on 39 yards and Aaron McGinn rushed for 16 yards.

ROCHELLE – The Brookesmith Mustangs recording their first victory of the season Friday night, slipping past the previously undefeated Rochelle Hornets, 70-68.

Avery Williford rushed for 103 yards and two scores for Brookesmith while Johnathan Willoughby chipped in 91 yards and three touchdowns.

Through the air, Clayton Adame was 2 of 3 for 71 yards and two touchdowns, while Willoughby was 3 of 4 for 64 yards with a scoring toss.

Next week, Brookesmith ventures to Santa Anna (3-0), as the Mountaineers are coming off a 68-22 win over Rising Star.

Carlos Morales completed 2 of 3 passes for 64 yards and a touchdown as Tyler Simpson caught both passes.

Next week, Blanket plays hosts to Zephyr (0-3), which is coming off a 72-66 loss to Stephenville Faith.

ZEPHYR – The Zephyr Bulldogs again inched closer to their first victory, but once more were denied by Stephenville Faith, 72-66, Friday night.

No further information on the game was available.

Next week, Zephyr makes the short drive to Blanket (2-1), which knocked off Lingleville, 51-6, Friday night.

Stone Sears led the way with 178 yards and one touchdown, Wesley Lackey chipped in 112 yards and two scores and quarterback Risien Shahan tallied 90 yards with a trip to the end zone.

COLEMAN – The Coleman Bluecats overcame a 12-point deficit and improved to 2-1 on the season with a 15-12 home win over the Brady Bulldogs Friday night.

The Blucats crept within 12-9 on a 1-yard quarterback sneak by Corbin Rosales with 2:51 left in the first half.

Coleman scored the go-ahead points with 4:57 to go on a 39-yard scoring sprint by Devinar Robinson.

The Bluecats rushed for 181 yards s a team and Ryland Gentry led the way with 85 yards. Roberson finished with 59 yards.

GOLDTHWAITE – The Goldthwaite Eagles notched their first win of the season on homecoming, clobbering the Olney Cubs, 48-8.

Through the air, Patrick hurled a 25-yard scoring toss to Guthrie.

Next week, Goldthwaite travels to Florence (0-3), which dropped a 35-21 decision to Bruceville-Eddy Friday night.

HASKELL – Fresh off an appearance in the Dave Campbell’s Texas Football Class 2A Division II Top 10, the No. 9 Cross Plains Buffaloes were dealt a 20-16 upset by the previously-winless Haskell Indians Friday.

Cross Plains (2-1) led Haskell (1-2) by a 7-0 count after one quarter and 14-7 at halftime. Haskell drew even at 14 in the third and added a fourth-quarter touchdown to the Buffaloes’ safety.

Cody McWilliams rushed for 62 yards and a touchdown, while Cason Allen added 35 yards while passing for 137 yards and a score to Ryan Hopkins, who caught three passes for 73 yards. Wade Byrd added three grabs for 62 yards.

Next week, Cross Plains looks to bounce back at home against De Leon (0-3), which fell to Millsap, 27-20, Friday night.