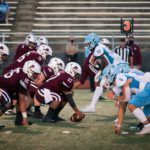 Defensively, the Lions allowed 414 total yards and 27 first downs to the Cougars. China Spring running back Emmanuel Abdallah rushed for 213 yards and four touchdowns, and quarterback Major Bowden added 100 yards rushing, plus 82 yards and a touchdown passing. The Cougars (3-0) defended their No. 10 state ranking in Class 4A Division II by texasfootball.com.

Offensively, the Lions finished with 193 total yards, and didn’t reach the 200-yard mark for the second straight week. In last week’s 35-15 win over Midland Greenwood, Brownwood was able to convert three turnovers and a muffed punt into four short scoring drives. But China Spring lost no turnovers on Friday.

“We’ve got to find some consistency on both sides of the ball,” Jones said. “We scored twice tonight, but we only had two stops on defense. That’s unacceptable. We’ll play well for stretches, but then we’ll have stretches where we don’t play well at all.

“We’ve got to find our identity. On that 12-minute drive in the second half, we put a tight end in the game and just pounded the ball. That may be our identity. We’ve got some find it because the road doesn’t get any easier.”

After the Cougars took their 35-7 lead, the Lions’ offense did put together a 19-play drive that took 12:18 off the second-half clock. Royshad Henderson carried 13 times for 52 yards during the 77-yard drive and scored on a 1-yard run. But that touchdown only pulled the Lions within 35-14 with 7:13 to play.

For the second consecutive week, David Jones filled in for Brownwood head coach Sammy Burnett, who is in quarantine after being exposed to COVID-19. Burnett is expected to return to practice Tuesday and return to the sideline for next Friday’s game at Burnet.

Abdallah scored on runs of 6, 3, 1 and 12 yards for China Spring on Friday. He extended his three-game rushing totals to 623 yards and 11 touchdowns. He often cleared the line of scrimmage without contact from a Brownwood defender.

Bowden, who played at Brownwood through the 2018 season, made a triumphant return, with 182 total yards, including a 7-yard scoring pass to Tre Hafford that gave the Cougars a 35-7 lead with 7:31 left in the third quarter.

“They have incredible team speed,” Jones said of the Cougars. “We thought we had a good defensive plan to contain their speed, but obviously, we didn’t.

“Their speed surprised us once the game started, and that’s troubling since we preached about their speed all week. We caught up to them in the second half, but by then, it was too late.”

The Cougars scored on their first two possessions to seize control of the game. Abdallah scored on runs of 6 and 3 yards as China Spring took a 14-0 first-quarter lead.

Brownwood came back with a 72-yard scoring drive. Jones threw 26 yards to Dane Johnson, whose diving catch advanced the ball to the China Spring 24. Henderson scored on a 9-yard run that pulled the Lions within 14-7 early in the second quarter.

But Brownwood’s momentum didn’t last. China Spring immediately drove 75 yards with Abdallah breaking for runs of 18, 17 and 12 yards. The 12-yarder went for a touchdown, giving China Spring a 21-7 lead with 8:02 left before halftime.

“We got them (Cougars) in a couple of third-and-long situations, but we couldn’t get our defense off the field,” Jones said of the drive that made it 21-7. “We thought we had an interception on the tipped ball, but the back judge ruled it incomplete. That could have been a big momentum boost for us. But when those things happen, we’ve got to get on with the game and make a play.”

The most crucial China Spring scoring drive of the first half was an 85-yard possession that came in the final minutes of the second quarter. Bowden threw passes of 30 and 13 yards to Coltin Locking as the Cougars reached the Lions’ 16 in the final minute. Abdallah’s 1-yard touchdown run with 14 seconds left before halftime gave China Spring a 28-7 lead.