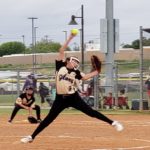 Brownwood News – The Brownwood Girls Softball Association is enjoying great success, in spite of the COVID-19 pandemic.  While 22 tournaments were planned for this year, many had to be cancelled for the pandemic.  Play has resumed now, however, and the recent “Back To School Bash” tournament was very successful.  According to City of Brownwood Sports Coordinator Roland Soto, the tournament produced approximately $72,000 in local economic impact and 165 room stays.

Twenty-two teams played in the tournament, and over 600 paid spectators were in attendance.  To attract more teams, the team registration was kept as low as possible, $100, and the teams paid the umpires before each game.  Team registration revenue was $2,000, plus gate and concession stand revenue of over $5,000, for a revenue total of over $7,000.  From that revenue total, the BGSA must pay for team prizes, USA Softball fee, insurance, hotel rooms for out-of-town umpires, concession stand labor and supplies, Head Umpire administration fee, gate workers, and other miscellaneous expenses.  The “Back To School Bash” tournament netted about $500 for the BGSA.

As mentioned above, 22 tournaments were planned for this year, but play was shut down in the spring and early summer because of the pandemic.  After resumption of play was approved, the BGSA hosted five tournaments in July and August of this year which have generated approximately $333,000 in economic impact for the Brownwood area and approximately 650 hotel room stays, according to Soto.  Six more softball tournaments are scheduled for the fall of 2020, which will produce an expected total economic impact for the year of just under $1,000,000.

Most important of all, of course, are the girls.  Over 200 local area girls participate in BGSA softball, gaining experience, improving their skills, and having fun.

The BGSA is governed by a Board of Directors.  Amanda Sheffield has been President for three years.  She and her husband David Sheffield put in countless unpaid hours coaching teams, planning tournaments, and maintaining fields.  USA Softball of Texas recognized their work and success, and appointed Amanda as a District 12 Commissioner, and David as a Deputy Commissioner.

None of this would be possible without the Bert V. Massey II Sports Complex, which was built by the City of Brownwood and first opened in 2011.  With the money made from the tournaments over the years, the BGSA has been able to purchase for the Sports Complex:  AC/heating units for the concession stand; AC/heating units for the girls and boys restrooms; three refrigerators for the concession stand; commercial-grade hot dog roller; two crock pots; new microwave oven; metal shelving for the concession stand and the storage shed; and windscreens for all four softball fields.  The BGSA is currently looking to purchase new clay to improve playing conditions at the sports complex.

Also from the tournament revenue the BGSA has been able to purchase new catching gear, helmets, and softballs for the teams in the league.

The next softball tournament in the Massey Sports Complex will be September 12-13.