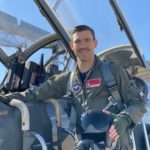 Kevin Domingue of Lake Dallas, a 2015 graduate of Howard Payne University, was recently awarded the Air Education and Training Command Commander’s Trophy, Leadership Award, Distinguished Graduate and the Flying Training Award at the conclusion of one year in Undergraduate Pilot Training at Vance Air Force Base in Oklahoma.

Domingue credited support from others and a duty to serve his country for his success thus far.

“I would say that being a pilot is one of the most challenging and rewarding kinds of job that you can possibly have,” said Domingue. “I had no ‘in’ and I didn’t just get lucky. I was inspired, willing to put in the work and persistent in pursuing my goal. It was cool to see the way God put people into my life to guide and help me along the way.”

While at HPU, he majored in mathematics in secondary education and played wide receiver on the Yellow Jackets football team from 2011 to 2014. He was active in student life, serving as president of HPU’s Fellowship of Christian Athletes chapter and as a resident assistant in Taylor Hall. He also volunteered as a student leader with the Coggin Avenue Baptist Church youth group.

Hunter Sims, director of athletics at HPU, said he recognized the great potential that Domingue displayed as both a student-athlete and an individual.

“I had the opportunity to coach Kevin in football throughout his time at HPU and I was fortunate to work with him through FCA,” Sims said. “He was always extremely analytical in his thinking on and off the field and excelled in everything he participated in at HPU. He was a valuable leader on campus at HPU. His success after HPU comes as no surprise. I am grateful men like Kevin are serving our country.”

Reflecting on his time at HPU, Domingue recalled the special classroom environment that was fostered by his instructors and professors.

“The people here genuinely try to help you and get to know you,” he said. “Your professors know you by first name, where you’re from and what your interests are. I think that is super unique to a school like HPU.”

One instance in an early morning class with Dr. Mike Rosato, former dean of the School of Education, encapsulates his experiences with HPU’s community.

“I was in an 8 a.m. class immediately following spring football off-season workouts and, naturally, I was exhausted and nodding off during the lecture,” he said. “It was small class, as is common at HPU, so that guaranteed Dr. Rosato would notice. He stopped his lecture, walked out of the room, and came back with a cup of coffee from the teachers’ lounge for me and told me I was free to get more there if I needed it.”

For Domingue, the experience represented the unique nature of HPU.

“At what other university in Texas, or in the country, is a dean going to pause class to get a student coffee? That’s a great microcosm of what HPU can offer.”

A family history of military service meant it was always at the forefront of Domingue’s mind. His father served a full career as an officer in the Marines and his brother is currently in the Marines and has been awarded the Purple Heart. However, after graduating from HPU, Domingue went on to teach high school math and coach football and soccer at Mineral Wells High School for two years and Eaton High School for one. It was while in the classroom that he first decided to attempt to become a pilot.

“I had been wrestling with the desire to serve because the military had always had a place of reverence in my life and I felt like I owed it to my country,” he said. “While giving the STAAR test one spring, I decided I should do it.”

Soon after deciding to commit to entering the military, an unforeseen encounter helped set his course and provided a beneficial relationship.

“At church one Sunday, the pastor mentioned his grandson had been selected to be an Air Force pilot,” Domingue said. “I spoke with the pastor afterward and he helped get us in contact. His grandson ended up being a mentor for me throughout the officer recruiting process.”

He offered a word of advice to young people considering serving their country through military service or pursuing any dream that may seem unreachable.

“If some 20-year-old kid is thinking about this, I would say just do it,” he said. “You only have one life, so set lofty goals and work relentlessly for them.”

Domingue’s training will continue with Introduction to Fighter Fundamentals, survival training, and an airframe-specific flight school where he will learn to fly and fight in the A-10 “Warthog” attack aircraft, after which he will be eligible for deployment.

Applications are still being accepted for the fall 2020 semester at Howard Payne University (www.hputx.edu/apply). For more information about HPU, including the wide range of available financial aid options, contact HPU’s Office of Admission at 325-649-8020 or by e-mail at enroll@hputx.edu.