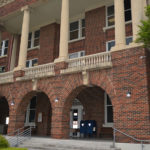 Various County officials presented their budget requests for the next fiscal year.  Commissioners listened to the requests and asked some questions, but no action was taken.

Sheriff Hill said that, because of extra expenses incurred by the COVID pandemic, he was not requesting salary increases, but would like increased salaries for his deputies if it could be worked into the county budget.

County Court At Law Judge Sam Moss reported that his court is running below budget this year by about 7 per cent, because fewer cases have been heard in court, as a result of the pandemic.  He warned, however, that his court expenses will go up once the pandemic is passed and his court tries to get caught up on pending cases.  He said his court can operate next year on the same budget as the current year, but did request cost of living salary increases for his staff.

Moss also said that last year the Commissioners voted to give all County employees a 5% pay increase.  All employees got the increase, including elected officials, except for himself and County Attorney Shane Britton.  That was because Moss and Britton received a 10% salary increase that was mandated and funded by the State of Texas.  But Moss and Britton argued that is separate and apart from their county salary, and as County employees, they believe they should also get the 5% increase that all other County employees received.  There was a long, and at times animated discussion, between the Commissioners, and Moss and Britton, as to whether they should receive the 5% salary increase from the County in addition to the 10% increase from the State.  Moss and Britton said they were not asking for back pay, but would like the disparity corrected in next year’s budget.

District Clerk Cheryl Jones and County Tax Assessor-Collector Christine Pentecost addressed the Commissioners, and asked for basically the same budget as this year, plus cost of living salary adjustments for their staffs.

District Judge Steve Ellis spoke next, praised his staff and asked for a cost of living salary adjustment for them.  He also said the District Court room needs a new video projector.  The current one is twenty years old, unreliable, and obsolete.  Ellis and County Attorney Britton recalled being in court on September 11, 2001, and pausing the court proceedings and watching the terrorist attack on New York City on this equipment.  Ellis suggested a large-screen smart TV, rather than a video projector, might be better.  The estimated cost is $5800.

District Attorney Michael Murray also asked for a cost of living salary adjustment for his staff.  He said his department’s travel and training budget needs to be increased, due to required training.  Some of the money for travel and training  can be taken from his postage and office supplies budget, due to efficiencies there.

Finally, County Information Technology specialist Matt Krischke addressed the Commissioners and asked for a salary increase for himself.  Since he took the job several years ago, the demand for technology, including equipment, software, and networking, has increased dramatically, and has required much more of his time, including after hours needs, while he has received only small cost of living increases to his salary.

The next budget workshops will be on Monday, after the regular Commissioners Court meeting, and then next Wednesday.