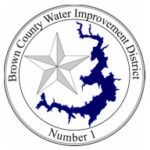 Brownwood News – The Board of Directors of the Brown County Water Improvement District #1 voted Tuesday to raise the wholesale price of treated water.  The current rate of $1.6646 per 1000-gallons will increase to $1.7209 per 1000-gallons, as of September 1, an increase of 3.382%.

District Manager John Allen explained that the district has experienced increased costs in labor, chemicals, and especially insurance, which has gone up 15%.  This is the first increase of substance in three years.  The district’s 2018/19 budget year had a 0.92% increase in water rates, and the 2019/20 budget year had a 0.006% decrease in rates.  Allen further explained that the rates are set based on a five-year rolling average of water use, thus buffering the rates against large increases or decreases.

The Brown County Water Improvement District wholesales water to the cities of Brownwood, Early, and Bangs, as well as the Zephyr Water Supply Corp. and the Brookesmith Special Utility District.  Conversations with the City Halls of Brownwood, Early, and Bangs indicated that all three are currently in the budgeting process for the next fiscal year, which begins October 1 for all three cities.  If any change is made to the water rates for those cities, the new rates will take place as of October 1, 2020.

Current water rates for all the above entities are shown below.  Keep in mind that some have a monthly minimum water charge, in addition to usage charges.