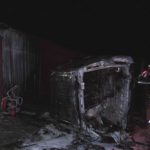 Tuesday night at approximately 10:45 pm Early PD officers and DPS investigated a major crash at the intersection of Early Blvd. and Garmon Drive in Early.  Juan Antonio Subias-Rodriguez, 37 of Wimauma, Florida is listed in stable condition at John Peter Smith Hospital in Ft Worth, according to Early Police.

Officer Gerardo Ibarra was patrolling a residential neighborhood when he observed a vehicle on Garmon Drive traveling at a high rate of speed. Officer Ibarra pulled onto Garmon Drive and checked the vehicles speed at 97 miles per hour in the 200 block of Garmon. Officer Ibarra attempted to locate the vehicle near the intersection of Early Blvd. and Garmon Drive where he discovered a major accident had just occurred.

The vehicle failed to negotiate the curve in front of the Early ISD primary campus and traveled through the grass area on the south west side of the intersection striking a large decorative rock and the brick “Early” sign. The rock was catapulted across Early Blvd leaving a large amount of debris.

Air-Evac responded to the scene and transported the driver to John Peter Smith Hospital in Fort Worth. The crash is being investigated as a DWI crash, according to Early Police Chief David Mercer.