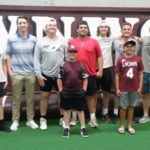 Brownwood News – While registration for the 2020 Little Lion program gets underway, several generations of Brownwood Lions and Little Lions reunited Thursday at the Snodgrass Fitness Center on the BHS campus.

Included in the group were Luke Chastain, class of 2011; Jace Newman, class of 2013;  Braden Jetton, class of 2019; current Lion seniors Blaize Espinoza and Bradley Robinson, Lion sophomore Chris Robinson, and Little Lion third-graders Bennett Williams and Hudson Garcia.  Chastain drove in from Dallas, Jetton from San Angelo, and Newman from Stephenville to be with their former Little Lions and support the program this year. 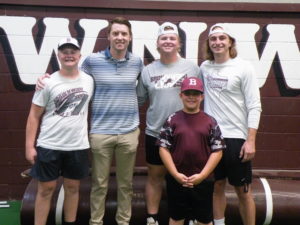 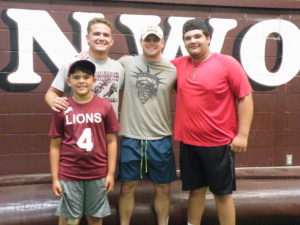 Braden Jetton’s father Brad Jetton was a Big Lion to Joe Stewardson in the 1990’s.

Lions Mother Christy Robinson said “We are super excited to offer Brownwood Little Lions again.  This has been going on for many, many years.  My boys were Little Lions, and now they are Big Lions.  It just means a lot to the boys in town.  They look forward to being out there and sharing some memories with those Brownwood Lions.”

Luke Chastain was on the 2010 team that won 14 games in a row, before bowing out of the playoffs in the state semi-final game to eventual state champion Carthage.  He is now a dentist, and is in orthodontic residency in Dallas.  He commented:  “It’s been cool seeing the Big Lion/Little Lion program, being a Big Lion to Brad, and now coming back to see him be a Big Lion to Hudson.  It’s kinda cool to see it come full circle. ”  When asked about his memories of Little Lion Bradley Robinson:  “He was always a spriteful kid, he was always running around.  It’s just crazy, I came back last year or the year before last, and I was working out and I saw him in the weight room.  I didn’t recognize him at first!”

Bradley Robinson’s memories of being a Little Lion to Chastain:  “Luke was my first Big Lion that did stuff with me.  He took me places, and I just had fun watching him on Friday nights”  Asked if those days were an inspiration to work hard and become a Brownwood Lion himself:  “For sure.  I didn’t even think about it until I got a Little Lion, you then think about how much that Big Lion meant to you.”

Current Little Lion Hudson Garcia:  “It’s a lot of fun, and it means a lot to have a Big Lion.”  Asked if having a Big Lion is an inspiration to be a Brownwood Lion someday, Hudson said yes, and hopes to play quarterback.  He also plays first base on his summer baseball team.

Current Big Lion Blaize Espinoza said “I remember when I was little, seeing my Big Lion.  It was like I was with a celebrity!”  His Little Lion Bennett Williams said “It’s a great opportunity to get to know the football players and support the Brownwood Lions.”

Sign-up for the 2020 Little Lions program runs through August 1st.  For more information on that, see the companion story on brownwoodnews.com.