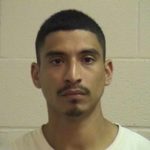 Brownwood News – This morning (Thurs) at approximately 11:30 am, officers with the Brownwood Police Department received information that 35 year-old Selso Ortiz Martinez was in the area of the Brownwood Public Library.  Martinez has a felony warrant for his arrest for narcotic related charges.

According to Brownwood Police, officers arrived in that area and observed Martinez sitting in a parked sedan in the parking lot of the Library.  As officers drove into the parking lot, Martinez left the scene in his vehicle and drove as if to elude officers.  For the general safety of the community, the vehicle pursuit was ended, soon after it began.

At approximately 12:20 pm, officers received information that when Martinez fled from police officers he made his way to an address in the 2300 block of 12th St where he unlawfully entered; brandishing a pistol. 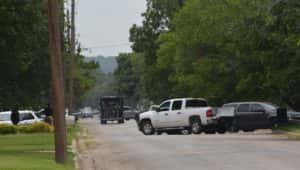 According to the police report, officers arrived in that area as Martinez fled on foot out a back door and into an alleyway.  Officers continued to pursue on foot while setting up a perimeter in that area.

Martinez fled through alleyways, over fences and into various backyards.  At one point, Martinez unlawfully entered a residence in the 2400 block of 13th St where he confronted the female homeowner and small children.  This family was able to barricade themselves in a back bedroom before fleeing to police officers who were positioned outside the window.  It was believed that Martinez was inside the residence while officers were evacuating the family. 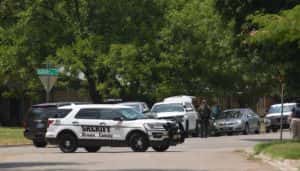 The Brown County Area SWAT team was contacted and arrived to assist.  At approximately 2:00 pm, the SWAT team made entry into the residence and confirmed that the residence was clear and unoccupied.  Martinez was not located.  Martinez is considered armed and dangerous.  He is of slender build, approximately 5 ft. 7 in. tall, and weighs 165 pounds.  He has short brown hair and possibly a goatee.

This investigation remains active and additional charges are anticipated.  Brown County residents are reminded and encouraged to report to police any information you have regarding Martinez.  Residents who wish to remain anonymous can call the Heart of Texas Crime Stoppers at 800-222- TIPS (8477).  Crime Stoppers pays rewards to citizens and tipsters for confidential criminal information regarding crimes in Brown and surrounding counties.