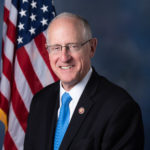 Brownwood News – U.S. Congressman Mike Conaway, Republican of the 11th District in Texas, has represented Brown County and the 11th District since 2005.  He did not run for re-election and is retiring from Congress at the end of this year.  Last Friday he attended the monthly meeting of the Brown County Republican Women.  We caught up with Representative Conaway there and asked him a few final questions.

You have been in Congress for sixteen years.  I’m sure you’ve had some good days and some days not-so-good.  Overall how much have you enjoyed your years in Congress?

It’s been absolutely a labor of love.  I have loved this job.  I still love it.  I get up every day excited about doing the work.  The House of Representatives is enshrined in our Constitution.  It’s a part of that form of governance that is the best in the world.  And so it’s worthy work.  I get to work with some of the most talented and dedicated and patriotic young men and women, in terms of staffers and people who work for me on the Hill.  But it’s been a labor of love and I’ve loved every minute of it.

Many Members of Congress are lawyers, but you are a CPA (Certified Public Accountant).  How has that helped you in Congress?

I bring a perspective to the task that is a little bit different than most.  As a CPA, George W. Bush and I were business partners for five years in the oil business.  So that gave me a perspective of what it’s like to sign the front side of a paycheck.  There were times when he and I were the only two in the business who knew we might have had a hard time making payroll in a week or two.  So those kinds of pressures put this in a different perspective, put regulations in a different perspective.  So being a CPA, the numbers get a little easier.  I served on the Budget Committee my first two terms in Congress.  That gave me a quick look into just how big the budget is and all the things going on.  It just brings different analytical tools to the table, a different thought process.  I tried to gather data to make decisions that were, not unique necessarily, but associated with being a CPA and I think that’s been very helpful in doing the job.

If there is one thing that you know now that you wish you knew before you went to Congress, what would it be?

Enjoy every day like it’s the last, because I am now looking at the end of this job in another couple of months and I’m dreading it.  I love this job.  Still love it.  I still like getting up every day and going to work.  But every chapter in our lives has a last few sentences, and that’s where I am now in respect to this job.  I got quoted early on about having more fun than was legal, and that stuck with me the entire time that I’ve been in Congress in sixteen years.  It really has been a great labor of love.  I have really enjoyed it.

Your successor will be elected on November 3rd, either the Republican August Pfluger or the Democrat Jon Mark Hogg.  What advice would you have for your successor?

Well I think August is going to win.  This District is stunningly conservative, and I think August will be our next Member (of Congress).  It makes it a little easier for me to leave, when I am handing it off to a man of that capacity and capabilities to do the job.

The one thing I would tell him is to make sure he is taking care of his family while he is going through this.  A big regret I’ve got is that I missed sixteen years of my grandchildren’s lives, because I spent more time doing this job, and less involved in their lives.  I knew at the time.  It’s something that you can’t change.  He’s got children at home and he needs to make sure he takes care of his family.

To do the job — it is a representative republic — you can’t represent people unless you know what they are thinking, or have a chance to tell you what’s on their mind, or what their positions are on particular things.  So the way I’ve done it is held town halls.  I just finished a town hall meeting in Coleman a few minutes ago.  It’s to be out and about, make yourself available to the people, and maintain that kind of demeanor that allows people to come up to you and say Hi, even if they are mad at you, or want to gripe at you about something.  You have to listen to the people to represent them.