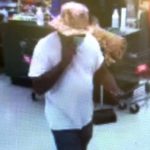 On Tuesday evening Sept. 15 at approximately 8 p.m. the Early Police Department received a call from a business in the 300 block of Early Blvd. regarding a possible attempted kidnapping of a child. Officers made contact with the assistant manager who stated that a customer had came to him regarding a male subject who tried to grab her 4-year-old daughter. The manager stated the man quickly left the store and got into a red newer model SUV, possibly an explorer parked at the outer edge of the parking lot. Officers made contact with the mother who reported a dark-skinned male, possibly Honduran decent, 5’9, stocky build wearing a stone washed color jean and a white t-shirt and a boonies style hat and a medical mask had been following her around the store. At one point she left the store to drop off her son at gymnastics and pick up her daughter. She then returned to the store and the male was still inside and began following her again. The victim stated at one point her daughter was a short distance from her and she called her to get beside her. As the daughter got closer to mom the male lunged toward the child as if he was trying to grab her but missed. The victim made contact with a store employee and reported it to them as the suspect quickly left the store.

Officers reviewed the video tapes from the store early Wednesday morning and obtained the photo of the suspect but the video of the attempt to grab the child was out of camera view.

There have been several reported incidents like this around the central Texas area lately. Human trafficking is a very big business worldwide. Children and young people, male and female are kidnapped all across the country daily. It is imperative that law enforcement is notified as soon as possible for any attempt or successful kidnapping, and if someone acting suspicious that causes concern, they should notify law enforcement immediately. The sooner law enforcement is able to start looking the better the chances are to locate the suspects.