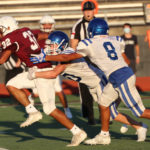 The Brownwood JV and Freshman Lions opened their seasons with home victories over Lampasas Thursday at Gordon Wood Stadium.

The Lions defense played tough all night limiting the Badger offense to under 50 yards rushing.

Jackson Yoder did an excellent job of place kicking for the Lions and Daub punted the ball well.

The Lions opened the scoring with a 15-play drive that ended on the first snap of the second period with a 1-yard touchdown pass from Gavin Brandstetter to Marsello Hooker. Hudson Reagan converted the PAT for a 7-0 lead.

Lampasas closed the gap to 7-6 midway through the third quarter, but was stuffed on a 2-point conversion attempt.

Brownwood immediately answered and boosted its lead to 14-6 on a 58-yard scoring toss from Brandstetter to Jordyn Nickerson, with Reagan again adding the PAT.

The Lions then put the game out of reach late in the fourth period with a 20-yard field goal by Reagan. An interception by Stevie Ramirez set up the final points.

Brownwood does not have enough linemen for a Freshman White team, so instead there is freshman/sophomore combined team that consists of 15 JV kids and 12 freshmen. 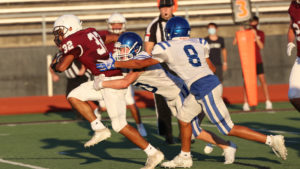