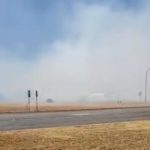 At about 11:30 am Monday, Brownwood Fire Department responded to what were described as numerous grass fires along Highway 377 South in Brownwood, in the general vicinity of 3M.  Numerous other fire departments from surrounding communities were summoned along with a request for dozers from the Texas A&M Forest Service, according to scanner radio traffic.  Highway 377 was being closed to traffic in the area.  We will post more information later.  (Brownwood News photo near 3M)