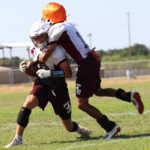 The Brownwood Lions on Friday morning wrapped up their first week of preseason football practice, donning full pads for the first time.

Lions third-year head coach Sammy Burnett said prior to the start of preseason work that Friday would provide a measuring stick for the team in terms of the physicality the coaching staff is expecting to see.

After Friday’s practice concluded, Burnett was not only pleased by what in saw in the physical aspects, but the mental approach is also meeting, if not exceeding early expectations.

“We have a good group of kids that are going to be physical, but more than that their minds are leading their bodies,” Burnett said. “We’re putting a lot on them defensively with every formation we can throw at them and today we threw in some motion and they adjusted. We even putting in sets they haven’t seen and they lined up properly. The mental part is huge. To me, that’s 90 percent of the game and the other 10 percent is the physical, but they’re applying both. That’s going to get give us the opportunity to get where we want to be over the course of time.”

After opening practice with a 75-degree afternoon Monday, the next three days featured triple-digit heat. The Lions’ conditioning stood the test, according to the head coach.

“Our kids understand it’s hot, we don’t talk about it,” Burnett said. “That’s just an element of the game and we have to go out and do our thing. Wednesday is always a tough day for us because it’s the third day and the body starts breaking down and you become more fatigued, but they fought through it and just progressed on through the week. They’re doing a good job of being mentally tough and mature.”

Burnett again reiterated the senior class has stood out early on in terms of leadership.

“We’ve had some great senior leadership,” Burnett said. “They understand what we expect out of them when it comes to day in and day out practice and they’re doing a good job of leading our kids.”

The second week of preseason practice usually ends with the first scrimmage, but this year that will be different due to the new COVID-19 guidelines imposed by the UIL. Brownwood will treat next week as normal, however, with the lone exception being an intrasquad scrimmage Friday night.

“We’re going to treat next week as if we’re having a scrimmage, and there will be a Maroon vs. White scrimmage instead of scrimmaging Salado,” Burnett said. “It’ll happen one day early, we’re choosing to do it Friday instead of Saturday to give our kids one more day to recover over the weekend. We’re going to start with our freshmen at 6 p.m., the JV will follow about 6:45 p.m., and our varsity will take the field around 7:30 p.m.” 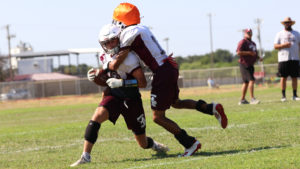