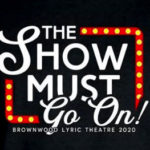 In March, the Lyric Theatre had just wrapped up its performances of “Nunsense Jamboree” and was full steam ahead toward April’s scheduled production “Get Smart.”

Then the COVID-19 outbreak brought all those plans to a screeching halt.

More than four months have passed since the Lyric was last able to entertain the residents of Brown County and the surrounding area. And during that absence, financial hardships have developed.

On Monday, the Lyric posted information on its Facebook page about a current fundraiser which reads: The Lyric knows that we have many who would like to help the Lyric and close to 150 patrons that have already purchased an annual package for 2020 but have only been able to see one show at this point. Our goal is to have 150 people make a donation to the Lyric for $100. For each $100 gift we will provide the T-shirt pictured. All 2020 Patrons will receive a T-shirt as a “thank you” for your support. Donations can be for any amount, all donations help! If you have any questions, please take a moment and email the Lyric at office@brownwoodlyrictheatre.com.

Eric Evans, Managing Director of the Lyric Theatre, spoke during a Tuesday afternoon interview about the adjustments the theater has been forced to make.

“Going back to March, we had a full slate of shows, people renting the theater out, things like that were taking place. Then everything had to shut down,” Evans said. “As the governor started to open things up, theaters were not included in that. Movie theaters got included initially, so we thought about showing movies but there wasn’t a clear path to understanding if that was something we could do.

“We’ve gone to a core budget, got very frugal, turned the air conditioning off, dialed it all back. We can operate until December not doing anything if we had to. We could pay what bills might come along and our small payroll. Now what we’re trying to do is put together a fundraiser that is not necessarily to get us to the end of the year, but when we do get to the end of the year we still have some resources to start next year. That’s how we function – have enough resources at the end of one year to get the next year going, and right now we’re missing that total. We are fine right now but we won’t be fine in January.”

Along with the production schedule being thrown off kilter, the summer kids workshop was canceled as well.

“We tried to open up with kids theater workshops in June, they had a sample of camps that you could do, but you couldn’t have indoor stuff like that,” Evans said. “All the kids would have had to have been masked and they would have had to social distance, and that can be problematic. Then the surge started happening again, more people became infected with the virus, so we pulled back.”

Today, however, the Lyric is beginning to show signs of life again, announcing an online production that will be available to view beginning Aug. 18.

“We’re planning on Aug. 18 to premier an online, virtual play called “Augustus Does His Bit,” Evans said. “It’s a British farce and we had a professional videography team come in and they put this together. We have some of our best volunteer actors on the stage doing this little show. The show is only 40 minutes long, it was shot here in the Lyric along with a couple of other places in town. We’re partnering with the chamber and restaurants and encouraging you to drive through or pick up a carry out order, then go home and have dinner and a movie.”

Tickets will be available at brownwoodlyrictheatre.com beginning Thursday afternoon for the cost of $10 per household. The play can be viewed up to 10 days after the initial premier date.

“When you buy your ticket you’ll get a special code emailed to you and that code will be good when you log on to the Lyric Theatre website,” Evans said.

As for the future, Evans hopes to welcome a live audience back to the Lyric Theatre in October.

“The first weekend in October I am affectionately calling it a coronavirus cabaret,” Evans said. “It’s a compilation of music from all the different shows we have done. We’re bringing back people who have been in all the musicals we’ve ever done. Ariel Sword played Cinderella in the very first show we ever did as an organization right here in this theater before it was ever remodeled back in 2004, and she’s going to come in and sing a piece. It’s one of those things where actors don’t have to rehearse together and they can do their pieces separately.”

If the October plans hold, the Lyric has additional shows lined up for the rest of 2020.

“We plan on laying out two new shows, the first will be “Get Smart” on the first full weekend in November,” Evans said. “Then we’re also planning on doing a Christmas show. We may only do those one weekend just because we don’t know how people are going to want to get out, plus we can’t hold a lot of people with the guidelines.

“We’re also working toward potentially something else for children in the fall that looks nothing like what we normally do. We’re trying to fulfill some grants out there that we’ve already received that if we don’t have to give back we would love to function that way.” 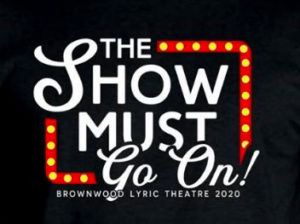 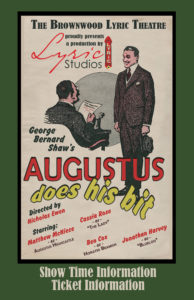