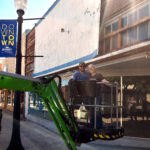 The face of downtown Brownwood continues to change, particularly the property at 406 Center Avenue where a new business venture is on the horizon.

Tommie and Ryan Bailey moved to Brownwood from Fredericksburg in June 2019 and purchased the building in the spring, prior to the COVID-19 outbreak.

“We bought the building back in the spring and our daughter (Rachel Howell) is going to put in a baby and children’s clothing store,” Bailey said. “I do fiber arts, a lot of wool fabrics, spinning and weaving, so I’ll have the back corner for anyone who wants to come in and see that. My husband builds furniture so he’ll be joining in at some point when he has the time to do that.”

The first step in their journey toward opening the business is restoring the building to its former status, which on Friday consisted of removing sheet metal above the awning to display brickwork not seen for decades.

“We were holding our breath on the first sheet, we didn’t know what we would find behind it,” Bailey said. “We knew that the windows would be in pretty good shape because we’d been upstairs, but we haven’t been able to find photos of the original building. When we took it off and saw the design, we were really excited that we made that choice.”

Regarding the decision to open a baby and children’s clothing store, Bailey said, “My daughter has always had a dream of having her own boutique. We moved here a year ago and she’s been up in the air about what to do. I started looking online at properties and I told her if that’s something you really want to do, I think we can make it happen here. We love Brownwood, the people, everybody’s excited to see good things happening. There’s so much support here. It’s a whole different world from what I’m used to.”

Originally the Baileys hoped the store would be open in the next few months, but the COVID pandemic has forced a change in plans.

“We had said mid- to late-September, we’d like to be open in the fall because we love that time period, it’s a festive time, but with COVID and all we’re up in the air,” Bailey said. “It may be the first of the year.”

The name of the business hasn’t been officially finalized, but the Baileys are hopeful those details are worked out in the near future.

“We’re hoping for Luna Maya,” Bailey said. “I have a granddaughter named Mia and we’re hoping one day she’ll have this.” 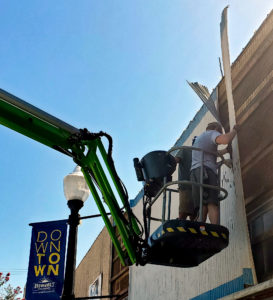