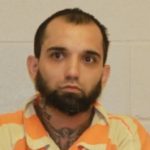 Brownwood News – An attempted traffic stop Sunday by the City of Early Police Department turned into a chase that ended in Brownwood with the arrest of a man from Comanche.

According to the Early PD, on Sunday, July 5, Sgt. Brandon McMillian attempted to stop a green Chevrolet pickup in the 800 block of Early Blvd for a traffic violation. The vehicle immediately sped up and failed to stop when the lights and siren was activated.  The vehicle went into the drive-through at Starbucks in the 100 block of Early Blvd., jumping the curb and ditches, and fled down CC Woodson toward Brownwood. Officers followed the vehicle to Vine Street to Parkway Drive in south Brownwood where the driver bailed out of the vehicle and ran on foot, the report states.

Sgt. McMillian and officers with Brownwood Police, Brown County Sheriff’s Office and Highway Patrol converged on the area. Sgt McMillian chased the suspect for several blocks where he was taken into custody in the 2300 block of Vine street. The suspect, Joshua Moreno, 32 of Comanche, was taken to the Brown County Jail on charges of Evading Arrest in a vehicle with previous convictions a 3rd degree felony.   According to online jail records, bond is set at $25,000.   Moreno also had outstanding warrants for evading arrest in a vehicle from Comanche County. Moreno also tossed a backpack when he went through the Starbucks parking lot that contained drug paraphernalia. Moreno was cited for the drug paraphernalia, the police report states.