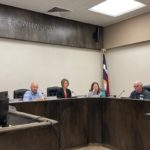 The Council approved, on second, third and final reading, an Ordinance amending Chapter 10, Amusements and Entertainments, of the City of Brownwood Code of Ordinances by adding an Article IV., entitled “Game Rooms and Amusement Redemption Machines”.  The ordinance provides for a penalty not to exceed $500.00 for conviction of any violation.

“The game room ordinance that the City Council passed today is basically giving additional requirements and regulation of gaming room establishments inside the city limits of Brownwood.  That primarily goes to the number of games that are allowable, having an annual inspection and other requirements to help these establishments comply with state law,” said City Manager, Emily Crawford.

The City has seen an increase in inquiries into the rules and regulations pertaining to the operation of Game Rooms inside Brownwood city limits.  Local law enforcement has investigated and shut down approximately 10 gambling game rooms within the city limits.  According to the City, several drug investigations have been conducted where illegal drugs have been purchased, delivered and/or used at various game rooms in Brownwood.

A part of the action taken was passage of a grandfather clause that is for those game rooms already in operation.

“It gives them 90 days to come into compliance and does not require any structural changes to the property that they’re in,” Crawford said.

The amendment passed does not prohibit game rooms in Brownwood but addresses the rules and regulations to be followed in order to obtain a permit to open a Game Room establishment.

Similar ordinances have been passed in the cities of Coleman, Ballinger, Victoria and Odessa and counties of Harris, Bell and Tarrant.

In other business from the meeting:

The Council also approved a lease for a 2007 Isuzu 100L Refueler from AVFUEL for the Brownwood Municipal Airport.  The monthly lease fee is $850 ($10,200 annually).  The airport’s old 1987 model refueler can no longer be repaired due to parts availability.  AVFUEL will be responsible for any major repairs to the drive train and belly valve during the lease while the City is responsible for all maintenance items.  The lease is from month-to-month and is not available for a lease purchase agreement.

The Council gave approval to the City Manager to sign an agreement with AthenaHealth, Inc.  The local Health Department is in process of converting its medical records to an electronic format.  Part of this conversion is the implementation of an Electronic Medical Records System.  The Health Department, in researching medical record systems, found the AthenaHealth Net System to be the most economical fit for the health department office.