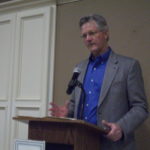 Texas Representative Dr. Glenn Rogers, who represents District 60 in the Texas House of Representatives, addressed the Brownwood Area Chamber of Commerce today.  Rogers reported on the recently completed session of the state Legislature.

“I get asked a lot what the session was like.  It was unprecedented.  We had so many challenges this year.  We started off with COVID in full force.  We didn’t know how the session was going to go, or if we were even going to have a session.  We knew we had to balance the budget, because that’s required by the (Texas) Constitution.  We wound up having a session and we accomplished a great deal.”

In addition to COVID, Rogers said the Legislature was also challenged by the deep freeze weather in February, and by additional security required as a result of threats of violence received by the Department of Public Safety.

In his first year in the Legislature, Rogers was assigned to the Transportation Committee and the Pensions, Investments, and Financial Services Committee.  Both turned out to be good assignments, Rogers said.

The Transportation Committee had a proposal to eliminate the front license plates on vehicles.  This concerned Rogers, because the reflective material used on Texas license plates is manufactured at 3M in Brownwood.  That proposal would cut in half the number of license plates made, which might result in a loss of jobs at the local 3M factory.  In addition to Rogers’ opposition, many law enforcement officers testified against the proposal, and it was defeated.

Dr. Rogers was most proud of two bills that did pass in both houses of the Legislature and signed into law by Governor Abbott.  The first was HB-5, the rural broadband bill.  It provides for a rural broadband center in the Comptroller’s office that will collect and disperse funds to expand internet service in the rural areas of Texas.  Rogers said COVID showed us how essential good internet service is today, especially in education, health care, and economic development.  He compared it to the expansion of electrical service and telephone service 100 years ago.

The other bill was HB-1554, the Municipal Development District bill.  Previously,  MDDs could not spend money on projects outside it’s own municipal limits.  The new law allows MDDs to spend money on businesses and projects that may be located outside the municipality, but still have an economic impact in the city.  Rogers said this will be very helpful to towns like Brownwood and Early that do have a Municipal Development District.

Public education is the biggest responsibility of the state.  But despite a challenging budget, the Legislature did provide $46.5 billion for public education, for which Rogers was very pleased.

Rogers said that while more than 7000 bills were filed this year, only 1100 were passed.  “The system is designed to fail bills, not pass them.”  As an example, the above referenced HB-1554 had to pass through over 50 different procedural steps in the Legislature, and it was over four months from the date the bill was first filed to the date it was signed into law.

The Legislature did not get everything done.  It failed to pass bills dealing with election integrity and bail reform, for example.  A special session will be called as early as August to deal with re-districting, and some of these other issues may be dealt with at that time.  Rogers expects to have at least two special sessions, if not more.