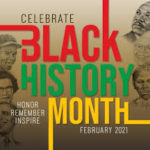 Brownwood News – February is Black History Month.  Brownwoodnews.com will run a series of articles this month about some of the early Black leaders in Brown County.  This is the second in the series.

Most folks in Brown County are familiar with the Hardin School building on Hall Street, adjacent to Cecil Holman Park and the Bennie Houston Community Center, but are not so familiar with the man for whom the school was named.

Rufus Forley Hardin was born in slavery in August, 1859, in Kaufman County, southeast of Dallas.  His formal education began at the age of 13 in Kaufman county, but at the age of 17 he moved north to Kansas and worked cattle.  He attended school during his eight months in Kansas, then moved back to Texas and continued his education in Van Zandt county, also southeast of Dallas. 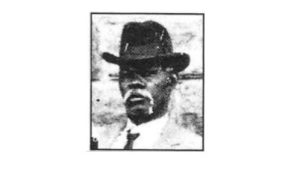 At the age of 20 Hardin bought 63 acres of land in Van Zandt county, near Canton, and began farming.  That venture was not successful, so he moved near Terrell, Texas where he bought 14 acres and farmed again.

In addition to farming, Rufus Hardin taught school in the winter and attended college in the summer.  He was graduated from the Prairie View Normal Institute (now Prairie View A&M University) with a Bachelor of Arts degree.  Hardin continued his studies at Prairie View, working towards a Master’s Degree, but his studies were interrupted when his first wife, Mary J. Vasher, died.   He continued his education, however, by enrolling in classes in Paul Quinn College in Waco, Tillotson College in Austin, and Fisk University in Tennessee.

Meanwhile, in Brownwood a vacancy occurred for a Principal and teacher for the “Colored School,” originally founded by George E. Smith. (Read more about Smith at this link.) Brownwood Public Schools Superintendent Starnes knew of R.F. Hardin’s credentials and reputation as a teacher.  Starnes had tried to recruit Mr. Hardin several times previously, and this time succeeded in persuading him to come to Brownwood in August of 1896.

Rufus Hardin taught all subjects, but was especially good in mathematics.  He was known as a good disciplinarian, and made efforts to expose his students to cultural events, in addition to their regular school work.  There were also two other teachers.  Hardin married Mary Jane Lasseter of Brownwood on October 28, 1905.

The school taught classes through the sixth grade, later extended to the eighth grade.  There were two buildings on Cordell Street, so the school was now known as the Cordell School.  Rufus Hardin led efforts to build a new building, finally convincing the Board of Trustees of the Brownwood Public School District to construct a new, stone building on Hall Street.  The new school building opened in September 1917 with three classrooms and an auditorium.  Principal Hardin and his male students built a balcony over the auditorium for a science area, and also added a library.  The school was now known as the Brownwood Colored High School and went through the tenth grade.  The Class of 1918 was the first to graduate from the new school, with five graduates. 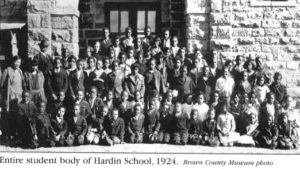 Rufus Hardin was an active member of the Lee Chapel AME Church, where he also taught Sunday School.  In addition, he helped many individuals become homeowners by building homes and selling them to buyers at affordable prices.  He also built a two-story house for himself at 706 Cordell, where he lived for the rest of his days.  In addition, Hardin organized the Law and Order Society, which encouraged citizens to live law abiding lives, and encouraged those that did not to move elsewhere.

In January 1934, Hardin’s wife Mary died, and he suffered a stroke.  He was unable to return to the classroom, and so his teaching career came to an end.  He taught in Brownwood for 38 years.

Later in 1934 the school was renamed the R. F. Hardin School.  By 1947 it had expanded to twelve grades and became a fully accredited high school, with thirteen graduates that year.

In May of 1954, the U.S. Supreme Court, in the famous “Brown vs. Board of Education” case, called for the desegregation of all public schools.  Rather than resist, as many communities did, the Brownwood Independent School District complied with the ruling.  Grades 9 through 12 were integrated in the fall of 1955.  The Hardin School continued for grades 1 through 8, and was re-named R. F. Hardin Elementary.  Finally in 1966 the Hardin Elementary School was closed, and all public schools in Brownwood were integrated.

The Hardin School building still stands on Hall Street, and efforts are underway to raise money for restoration of the building, and conversion to a museum.

After Hardin’s stroke in 1934 he was not expected to live long.  But he beat the odds and lived fifteen more years, finally dying on July 3, 1949.  He and his wife Mary are buried in Greenleaf Cemetery. 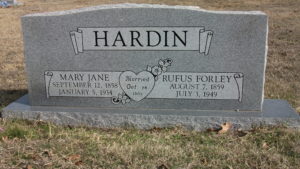