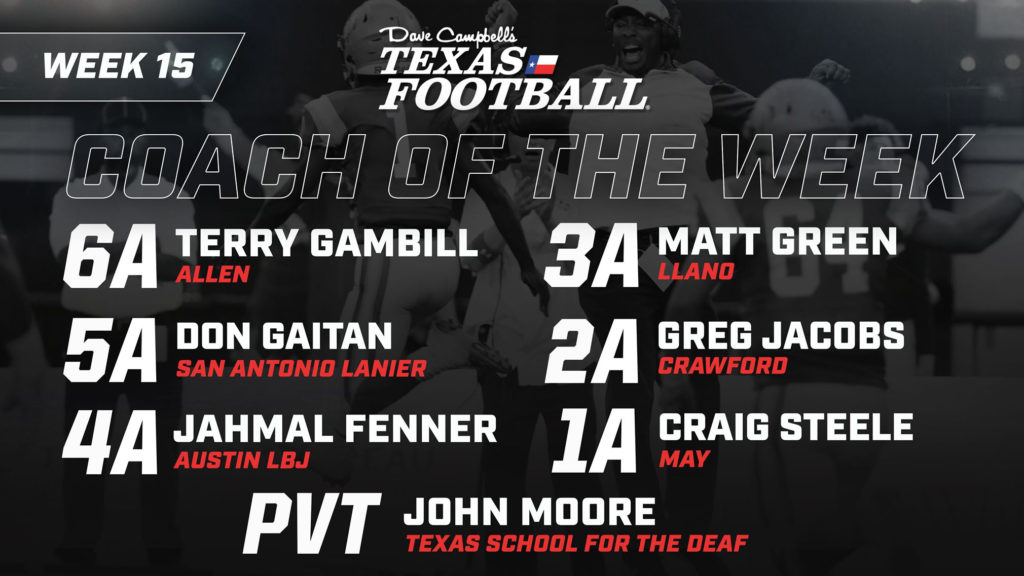 May’s Craig Steele and Llano’s Matt Green, a Brownwood High graduate, were named the Dave Campbell’s Texas Football Coaches of the Week in Class 1A and 3A, respectively, for Week 15.

The May Tigers knocked off reigning state champion Blum, 92-86 in overtime, this past Saturday, to earn a berth in the Class A Division I state championship game against Sterling City at 2 p.m. Wednesday, Dec. 16 at AT&T Stadium in Arlington.

The Tigers’ state berth is their first since 2014, and third in 17 seasons under Steele’s tutelage. May has compiled a 144-55 record under Steele, who will coach his 200th game at May in the state final.

The Llano Yellow Jackets upended Lago Vista, 31-25, Friday to earn the Class 3A Division I Region IV championship. The undefeated Yellow Jackets (13-0) will square off with Region III champion Hallettsville (12-2) at 7 p.m. Thursday in Georgetown in the state semifinals.

Green, who played football at both Brownwood and Howard Payne, served as an assistant coach at Stephenville and Lake Travis, as well as head coach at Marble Falls, prior to taking over at Llano three years ago.