Brownwood News – At the Brown County Commissioners Court meeting today, no action was taken on a request for a tax abatement for a solar power farm project.

Dale Cummings and Christian Fiene from Intersect Power addressed the Commissioners about the proposed 3000-acre solar power farm in southwest Brown County, near Brookesmith.  They informed the Court that the project would produce 300-megawatts of power, 830-gigawatts annually, enough to power nearly 60,000 homes.  The plant would connect with a nearby electrical sub-station, thus requiring little in new transmission lines and towers.  The design and construction of the plant would cause minimal disturbance to vegetation and wildlife, according to Cummings and Fiene.

Intersect Power currently has three solar farm projects under construction in Texas, with six others “in the queue.”  Of the six, they hope to proceed with three projects, and the Brown County project is among the top three they would like to complete.  But a tax abatement from the County would be needed, said Fiene.

The project would be within the bounds of the Brookesmith Independent School District.  In January 2020 the Brookesmith ISD Board of Directors voted to grant a Chapter 313 Appraised Value Limitation for the project.  Fiene said that even with the tax limitation from BISD and a tax abatement from the County, the Intersect project would still pay an estimated $19.4 million in taxes to the County and the BISD over 35-40 years.  In the map below, the yellow area is the Brookesmith ISD, and the solar farm would be within the heavy black lines on the western edge of the school district. 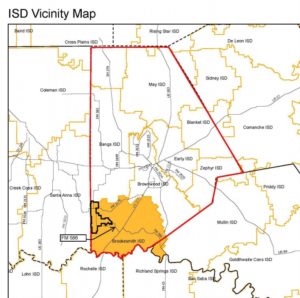 Commissioner Gary Worley, whose Precinct 1 would host the solar farm, asked how many tax dollars per year would be paid to the County, even with an abatement.  Cummings said the County would be paid an estimated $137,000 in taxes annually for the first ten years with the abatement in place.  After that, when the abatement expires, he said they would pay about $253,000 per year, reducing to about $168,000 per year with depreciation over the life of the equipment.

Commissioners expressed concern, if the tax abatement is approved, about setting a precedent that would tie their hands if another project in the future — such as wind power turbines — requested a similar tax abatement.  Cummings said approval of Intersect Power’s request would not obligate the County to issue more tax abatements to other projects.

Gary Worley suggested, and the other Commissioners agreed, that no action be taken today.  The Court would like some time to study the issue and make the best decision for the citizens of Brown County.

If the tax abatement is granted and the project committed to by Intersect, construction would begin about May 2021 and take about one year to complete.  Three-hundred jobs would be created during the construction phase of the project, and two permanent jobs thereafter during the operational phase.