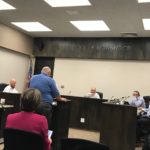 The Council approved an Interlocal Agreement with the Lower Colorado River Authority for the purchase and installation of a 700 MHz radio system and related equipment.  They also approved a Dispatch Agreement contingent on the entities of Brown County, City of Early and City of Bangs also approving the agreement.  According to City Manager, Emily Crawford, the City of Brownwood has been operating the dispatch center for all of the entities in the county.  All of the dispatch employees are City of Brownwood employees and it’s been a service the city has been providing, in exchange for jail bed space with the County.  “That agreement with the County is expiring because we have paid off the joint Law Enforcement Center.  This new agreement entails that all of the entities (Brownwood, Bangs, Early and County) will all share in the cost of the dispatch services,” Crawford said.  The percentage that each entity shares is based on the number of calls for service that their agencies accrue.  The agreement marks a significant project involving several governmental agencies.  “I don’t know that Brown County has had any kind of project this large that is this beneficial for our first responders and public safety since the original law enforcement center,” Crawford said. The LCRA infrastructure and equipment cost for Brownwood, Early, Bangs, Brown County, and the volunteer fire departments, plus related tower upgrades, is $4 million.  The entities have been working on this project since 2018.

The Council approved a modification to the Utility Ordinance pertaining to customer cutoff valves and plumbing.  Recently the Utility Ordinance was modified to require that a customer cutoff valve be installed after the meter so that the customer can shut off the water supply to their residence or business without utilizing the City’s valve.  The city is finding that steel handle valves or other inferior valves are being installed (underground) which deteriorate over a short period of time.  The city is recommending that any valve that is installed at the meter be made of all brass, stainless or a combination of both so that the customer has a valve that will not deteriorate.

Residential or commercial new construction or any permitted plumbing work that involves re-plumbing of a house or structure and/or replacement of yard service line will require, at the owners expense, a customer cutoff valve located within two foot of the water meter box or at the owner’s property line. The valve and handle material must be either all brass, stainless or a combination of both. No water shall be supplied to such customer unless the customer cutoff valve is installed.

The Council approved seven new capital leases with Citizens National Bank and assigning a property tax pledge.  These major investments in equipment include:

The Council also voted to approve the ordinance setting charges, fees, rates and deposits for customers on the Brownwood water, sewer and sanitation system for FY 20/21.  There were no increases in any of the rates from the FY 19/20 Utility Rate Ordinance.