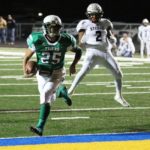 The following are glimpses at the local Week 1 showdowns:

The two-time defending district champion Blanket Tigers venture to Gorman to clash with the Panthers in their initial outing of the season.

“Our expectations are to win the district championship, get to the playoffs and go from there,” said Blanket head coach Tyler Tabor. “We’ve done that two years in a row. The district has changed a little bit but not much. We have some quality teams in there. Brookesmith is going to be very good again, Sidney has more numbers than anybody and is on the rise, and nothing is going to be easy against Rising Star and Panther Creek as well. But we are the two-time defending champs and until somebody beats us we wear that hat.”

Among the players to watch for the Tigers are Castaneda, Tyler Simpson, Mario Morales, and Brady Furry – all seniors.

Blanket is coming off a scrimmage at Cherokee this past Friday.

“It was good to go against someone else and at game speed,” Tabor said of the scrimmage. “There’s lots of things to work on obviously but we did some good things. I think our ones scored two times to their one in the controlled part and then it was 14-0 in the live quarter. Our twos, I believe we scored three to their one. Our tackling wasn’t great but got better as we went on. Offensively our inexperienced quarterback did a good job I thought handling the ball and dispersing it for his first time at that level. We may have lost one player to injury for a couple weeks. I thought the seniors played pretty well, but we will have to pick it up this week.”

Gorman welcomes back three starters on each side of the ball from a 7-4 playoff team a year ago. The Panthers are projected to finish third in District 13-A Division I according to Dave Campbell’s Texas Football magazine, behind May and Baird and ahead of Lingleville and Santa Anna.

According to sixmanfootball.com, Blanket is a 34-point favorite.

The Class A Division I No. 7 May Tigers begin their chase for their first state championship appearance since 2014 as they visit the Bryson Cowboys.

May returns five starters on each side of the ball from a 10-2 squad a year ago. Among the key returnees are Rory Bustamante – the preseason offensive player of the year in District 13-A Division I, according to Dave Campbell’s Texas Football magazine – along with Isidro Salinas, Chris Flenniken and Blake Harrell.

“Rory Bustamante, Isidro Salinas and Chris Flenniken, those kids are three-year starters and are seniors,” said May head coach Craig Steele. “Blake Harrell is a three-year starter as a junior and we have a couple of kids that didn’t play last year that are seniors in Korbin Bass and Hayden King. They’re going to add a lot to this team. Then we have some young guys that are ready if we have the room for them at the varsity level.

“We’re going to be real big at most positions, and we have some smart football players with brute strength. And for once injuries are not going to be the end of the world for us. We have depth in places we haven’t had depth in a long time.”

The Tigers scrimmaged against No. 2 Jonesboro last week.

“Our scrimmage went well,” Steele said. “We came out of it healthy, most importantly.”

Bryson brings backs six offensive and four defensive starters from a 5-5 squad a year ago. The Cowboys are tabbed to place second behind Saint Jo in District 9-A Division I.

According to sixmanfootball.com, May is a 45-point favorite.

The Zephyr Bulldogs welcome the Sidney Eagles as both teams attempt to start their seasons in the win column.

Numbers are an issue this year at Zephyr, but the bulk of the small roster consists of seniors.

“Having a big group of seniors, most of them know the system since it’s the second year of the system,” said Zephyr head coach Jeremy Phillips. “We have some good running backs, so our run game is what we lean on, along with our senior leadership.”

Among the players to keep an eye on are Kannon Eoff, Jayden Millican and Bryson Gibbs.

“Kannon Eoff and Jayden Millican are the ones that put in the most time over the summer and we’re excited about them,” Phillips said. “Bryson Gibbs is another kid that should be big for us. We have a lot of them that we hope will improve and help the team, but those are the ones that stand out so far.”

Zephyr held its lone scrimmage of the preseason against Brookesmith last week,

“I thought we looked solid,” Phillips said. “Our run game was effective at times and we did a pretty good job blocking. We need to get better defensively. We lost a kid and are down to only eight eligible but we will continue to fight and work to get better.”

Sidney returns all six starters on both sides of the ball from a 3-7 team a year ago. The Eagles are projected to come in third behind Blanket and Brookesmith in District 15-A Division II and ahead of Rising Star and Panther Creek.

According to sixmanfootball.com, Zephyr is a 45-point favorite.

The Cross Plains Buffaloes begin their 10th season under the direction of head coach Daniel Purvis on their home turf against the Menard Yellow Jackets.

The Buffaloes return 12 of 20 lettermen and seven offensive and eight defensive starters from last year’s 7-4 squad that finished third in the district race.

“Cody McWilliams is a senior and a returning first-team all-district tailback for us,” Purvis said. “He’s had an unbelievable summer and offseason. I think he’s going to have a great year. Another one is Cason Allen, he’s a returning two-way starter for us, he plays safety and he may be our quarterback, or a running back. He’ll be carrying the ball a lot.”

Menard welcomes back eight offensive and nine defensive starters from a 3-8 playoff team in 2019. The Yellow Jackets are picked to come in fifth in District 14-2A Division II behind Christoval, Eldorado, Junction and Miles, and ahead of Rocksprings.

According to Harris Ratings Weekly, Cross Plains is a 32-point favorite.

Coleman’s first game as a member of the Class 2A Division I classification finds the Bluecats traveling to Miles to battle the Bulldogs.

The Bluecats return of 17 of 25 lettermen – including eight offensive and seven defensive starters – from the 2019 squad that posted a 4-6 record.

“We’ve got a lot of guys back that have been playing varsity football even when they got forced into it,” said Coleman head coach John Elder. “With the returning experience and the depth we have this year across the board that will help us mature and get going in the right direction.”

Coleman squared off against Hamlin in scrimmage action last week.

“We showed some positive things,” Elder said. “We have to get a few details ironed out. Hamlin is strong across the board and should make a good run again.”

Miles returns nine starters on each side of the ball from a 7-4 playoff team of a year ago. The Bulldogs are projected to place fourth in District 14-2A Division II behind Christoval, Eldorado and Junction, and ahead of Menard and Rocksprings.

According to Harris Ratings Weekly, Coleman is a 21-point favorite.

The second season of the Keith Virdell coaching era at Goldthwaite begins at home as the Crawford Pirates – ranked No. 12 in Class A Division I by Harris Ratings Weekly – come calling.

Virdell welcomes back 11 of 20 lettermen, including seven offensive and five defensive starters, from last year’s 2-8 squad.

“I feel like we have a better leadership corps this year,” Virdell said. “We have a good group of guys who are self-motivated enough through all the shutdowns. They kept working out, trying different ways to work out, and we had to be creative through all of that. They did a great job of keeping themselves in shape, and then when we were able to work out in the summer we had great attendance, a lot of kids showing up, a lot of participating for that so I think the guys are ready to get after it.”

Crawford welcomes back six offensive and seven defensive starters from a 9-4 playoff team a year ago. The Pirates are anticipated to claim the District 7-2A Division title in a league that also features Bosqueville, Hamilton, Tolar, Valley Mills, Rio Vista and Itasca.

According to Harris Ratings Weekly, Goldthwaite is a 35-point favorite.

Coming off back-to-back deep playoff runs, the San Saba Armadillos – ranked No. 6 in Class 2A Division I by Harris Ratings Weekly – look to begin a potential push toward Arlington at home against the Eldorado Eagles.

The Armadillos have won 27 of 29 games over the last two seasons, including a 13-1 mark a year ago. San Saba returns 15 of 27 lettermen from the 2019 squad, including seven starters on each side of the ball.

“We lost a great senior year group, those kids have been with us about three years working hard in the weight room,” said second-year head coach Andreas Aguirre. “They built the bridge for these young men, guided them down the right path and laid a foundation for us. But we still have a solid kids that work hard.”

“Our coaches and kids did very well,” Aguirre said. “I think we did some great things but at the same time there is a lot we need to work on if we want to continue having a championship culture.”

Eldorado brings back five starters on each side of the ball from a 10-2 playoff team that reached the area round in 2019. The Eagles are tabbed to come in second in District 14-2A Division II behind Christoval and ahead of Junction, Miles, Menard and Rocksprings.

According to Harris Ratings Weekly, San Saba is a 35-point favorite

The Comanche Indians kick off their season with a stellar challenge, visiting the Mason Punchers, ranked No. 10 in Class 2A Division I according to Harris Ratings Weekly.

The Indians bring back 20 of 28 lettermen, including seven offensive and eight defensive starters, from a 5-6 playoff team a year ago – the seventh straight Comanche squad to reach the postseason.

“We’ve got some kids that came back on both sides of the ball that have played a lot,” said Comanche head coach Stephen Hermesmeyer said. “We’re hoping that can carry us over and leads to us being a little more relaxed on Friday nights early in the season, and being able to execute offensively and defensively. That leadership in the senior class is really big.”

“We had a solid scrimmage, got lots of reps and saw some good things,” Hermesmeyer said. “We have a lot of areas to improve but the kids played hard. We’re ready to go for this week and we have a huge road test right out of the gate. We are just excited to be playing.”

Mason returns four starters on each side of the ball from a 10-3 playoff team from a year ago. The Punchers are picked to capture the District 14-2A Division I title in a league that also features Ozona, Johnson City, Brackettville, Center Point and Harper.

According to Harris Ratings Weekly, Comanche is an 11-point underdog.

#4 Richland Springs has a bye in Week 1

Brookesmith also has a bye in Week 1

According to Brookesmith head football coach Scott Edmondson, the UIL is not allowing the Veribest Falcons – who were to host the Mustangs at 7:30 p.m. Thursday – to play their Week 1 game.

Veribest went into a COVID quarantine after six days of preseason practice and resumed workouts this week, therefore the Falcons have not adhered to the mandatory 10-day re-acclimation period, Edmondson said.