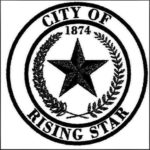 A press release from the Office of the Mayor of the City of Rising Star states Police Chief Wayne Edgin has resigned.  The release is below from Mayor Jim Carpenter as it appears on the Rising Star City Hall Facebook page.

The resignation of the Police Chief will be on the City Council agenda for acceptance at the City Council’s next meeting which will be Monday, July 27, 2020 at 6:00 p.m.”