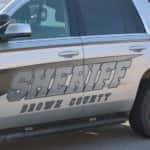 On Monday, June 22, at 11:53 hours, Deputy Byron Langley arrived at Ardee Drive in regards to a theft.  Deputy Langley spoke with a man who stated another man had taken items from his property without his consent.

On Monday, June 22, at approximately 12:25 pm, Deputy Scotty Burke was dispatched to a local residence on County Road 178 at Bangs.  This was in reference to an animal bite report and investigation.

On Monday, June 22, Deputy Joe Thomas was dispatched to a report of a Domestic Disturbance on Limerick Drive in Brownwood.  The complainant advised her boyfriend had been violent toward her all day.  A report was made.

On June 23, Deputy Joe Thomas was dispatched to a walk-in at the Brown County Sheriff’s Office.  This was in reference to a civil matter on County Road 564 in Brown County.  The complainant advised after loaning a vehicle to an individual it was returned with several parts missing.  A report was made.

On Tuesday, June 23, at approximately 14:40, Deputy Scotty Burke was dispatched to Avenue C in Brownwood.  This was in reference to a dog killing a chicken.

On Tuesday, June 23, at about 15:49 hours, Deputy Byron Langley arrived at Ardee drive in Brownwood.  This was in regards to a burglary.  Deputy Langley spoke to a man (victim) who stated he believes his former tenant (suspect) kicked in the door to the residence.

On Tuesday, June 23, at about 17:16 hours, Brown County Deputies Simpson and Thomas responded to Turner Drive.  This was in regards to a domestic disturbance which had just occurred.  Upon arriving on the scene, Deputy Simpson made contact with the caller who was the grandfather of a female victim and a suspect.  Deputies were advised the suspect had punched the victim several times before hitting her with a part of a baby’s bed which was lying in the front yard.  Deputies attempted to locate both parties without success.  Deputy Simpson cleared the call with a report.

On June 23, Deputy Toby Mathis spoke with a person by phone.  This was about three missing check books.  Information was gathered and a report was made on Waterford Drive.

On June 24, Deputy Toby Mathis was informed by Rising Star PD of criminal mischief which occurred in Brown County.  A male victim reported his vehicle was damaged by a named suspect.  A report was made.

On June 24 Sgt. Taylor Fletcher performed a warrant service at Sleepy Oaks Lane for a man in connection to Injury to the Elderly. A baggie of methamphetamine was found in his pocket, as well as an additional baggie and glass pipe, which were found hidden in the garage. The combined weight of methamphetamine without packaging was estimated at around 0.1 grams. The man was charged with Possession of Controlled Substance <1 Gram and Tampering with Evidence.