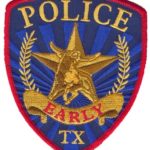 On 06/16/2020 The Early Police Department and Texas Rangers arrested 38-year-old Jerry Crouch of Early for the charge of Sexual Assault. Jerry Crouch was arrested at the Insane Ink tattoo parlor in the 900 block of Early Blvd where the incident reportedly occurred. A female victim reported that she was a victim of a sexual assault at the business while there for a tattoo. Investigators believe there may be additional victims in this case and are asking for the publics help.

Anyone who believes they may know or be a victim is ask to call the Early Police Department at 325-646-5322.  The investigation is ongoing.